Bolivar Flats Shorebird Sanctuary is a protected area north-east of Galveston. With a combination of beach, mud flats and salt marshes, it attracts huge number of birds.

It was mid March, I was in Houston  and I had a full Sunday to spend. I decided to go down to the coast. Too early in the year for migrants perhaps, but the area is known for great numbers of shorebirds year-round. Driving down to Galveston from Houston is about 1.5 hours. From Galveston you follow highway 87 towards Bolivar Peninsula. There is a free ferry service operating 24h crossing the channel between Galveston and Bolivar Peninsula. On the ferry I was greeted with large numbers of Laughing Gulls and a few Grackles that seemed to be residents of the ferry. 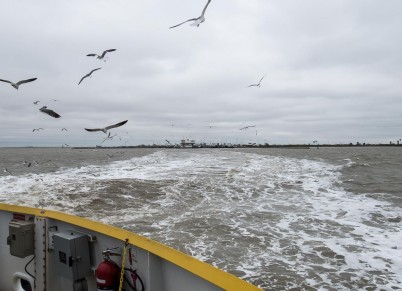 The weather was not favorable, neither for humans nor birds. A strong, bitterly cold wind from the north, 10C and overcast. As a result, all photos here are grey and grainy... The Bolivar Flats Shorebird Sanctuary is maybe the best know location on the southern peninsula, but the fact is that there are birds all over, and it is well worth driving around a little between the marches and tidal pools. I started off at the North Jetty, at the end of 17th street. Straight away I had large flocks of American Avocets and Black Skimmers along with a few Marbled Godwits and Willets. 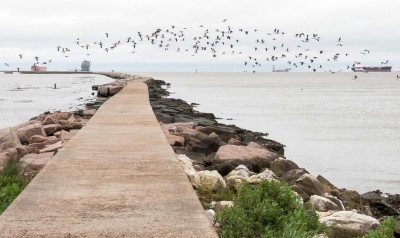 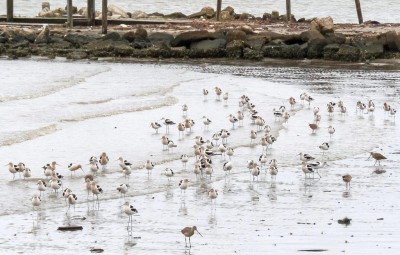 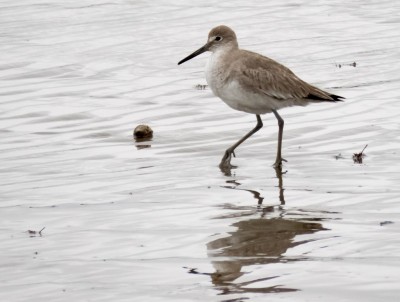 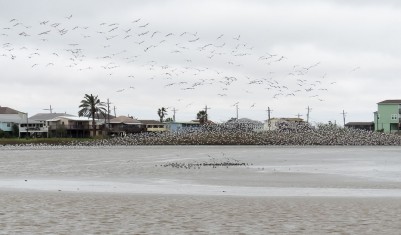 I hadn't ventured more than a 100m out on the jetty before i realized I was hopelessly underdressed for the weather. I had to escape back to the car to defrost. Amazingly, all the locals who were fishing off the jetty were wearing shorts... Low tide was 11:30am this day, and I arrived two hours before that. Large areas of the mud flats were already exposed. Before venturing onto the Bolivar beach I decided to take a trip around the 108 loop. It turned out to be much more sheltered from the wind. I soon had Belted Kingfisher, Loggerhead Shrikes and an American Kestrel sitting on wires along the read. Of course, dark birds against gray clouds will never result in a good photo. I also took a drive along Frenchtown Rd. The tidal pools and surrounding areas there immediately revealed Reddish Egret, Long-billed Curlew, various Terns, Brown Pelicans, Roseate Spoonbills, Cormorants, Mergansers and Meadowlarks. Not bad - before even getting to the Sanctuary. 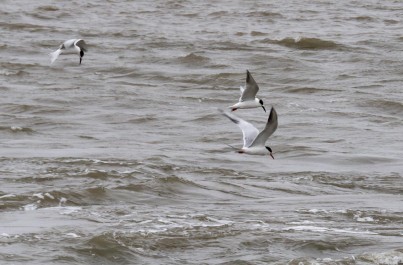 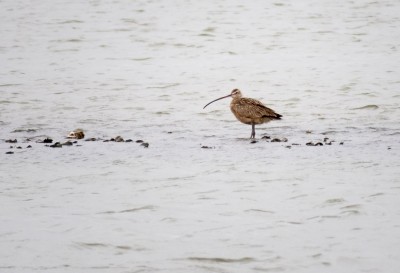 The Sanctuary is reached by following 87 north and turning right onto Rettilon Rd. You can drive right onto the beach and down until the Sanctuary barrier is reached. Note that a beach parking permit is required. It can be bought for $10 in all grocery stores. I got mine in a store in the crossing between highway 87 and 7th street, not far from the ferry. There is a hefty fine if you are caught on the beach without it! 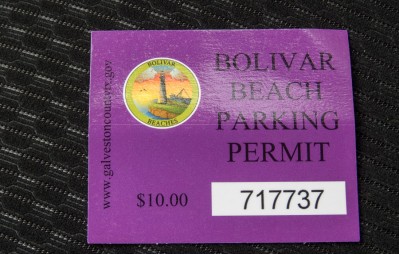 I made a stop on Rettilon Rd halfway towards the beach. There were lots of Eastern Meadowlarks singing there, along with Red-winged Blackbirds. A few Yellowlegs were walking around in the marshes. 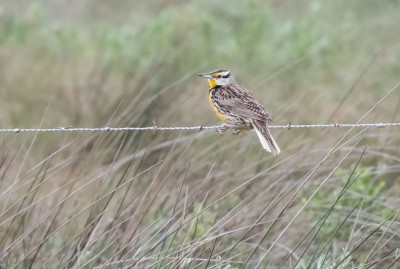 Once on the beach you can walk quite a distance into the Sanctuary. It is not recommended to venture into the dunes. Besides disturbing birds there are venomous snakes! 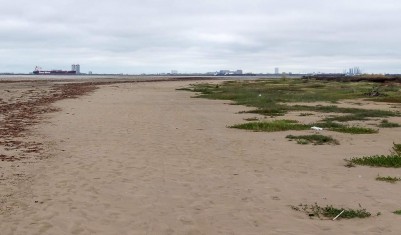 I soon realized that at low tide, the birds are really far from the beach! A spotting scope is really needed here. I only had a small camera, which I hardly could hold still in the strong wind. But there were thousands of waders! I also realized that at low tide you get a lot closer to the birds from the North Jetty than the beach! Should be clear from the photos below which were taken at maximum zoom. 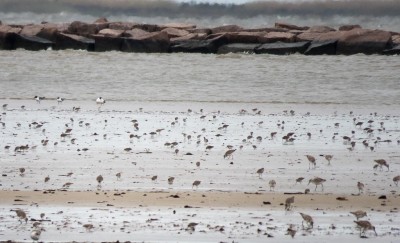 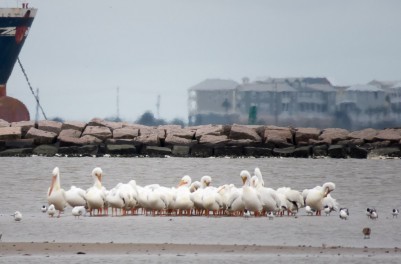 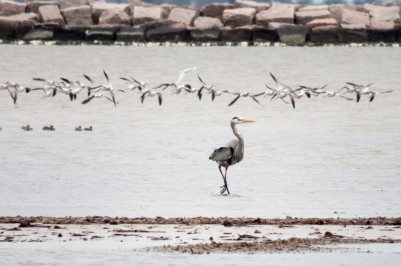 The industrial backdrop is rather interesting. Large ships are anchored right outside the jetty waiting to get into port, and if you look north there are the petrochemical industries belching flames and smoke. But the birds are all ignorant of this. There are quite a few birds along the dunes as well. American Pipits, sparrows and various ducks in the small pools. The beach was right at the receiving end of the freezing wind, so I had to return to the car to heat up after 30min. On the gull checklist i had Laughing, Bonaparte's, Herring and Ring-billed. 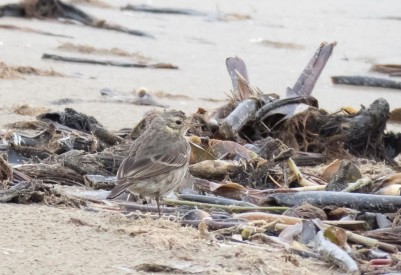 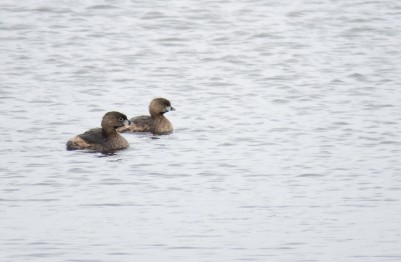 I was really too underdressed to venture out onto the jetty again, so I decided to take the ferry back to Galveston and pay a visit to the East End Galveston. There is a sheltered pool there and it turned out that quite a number of birds decided to wait out the weather in the shallow water. Black Skimmers, Black-necked Stilts, Terns (Caspian and Forester's), Godwits, Pelicans, Cormorants and gulls. 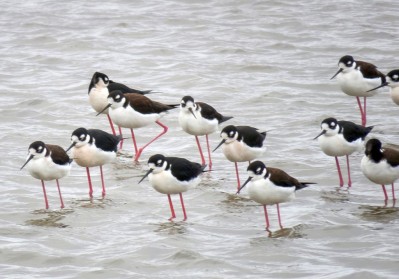 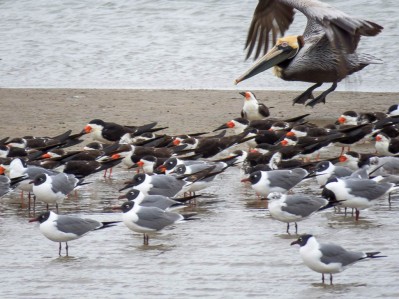 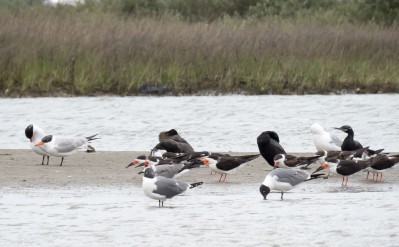 After a bone-freezing day at the beach, I decided to head back to Houston. Despite the weather, the trip was really rewarding - I have never seen so many waders on a small area before. Next time I will try to get here during spring migration.
contentmap_plugin